The National Association of Science Writers (NASW) has awarded CU Boulder science writer Dan Strain an honorable mention in its prestigious Excellence in Institutional Writing Awards competition for his story “A Walk in Two Worlds.”

The 3,000-member organization founded the awards in 2018 to recognize “high-caliber, publicly accessible” writing produced on behalf of an institution. They are among the highest honors a science writer can earn. 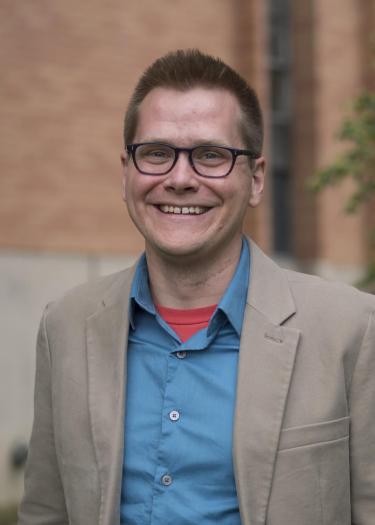 Strain’s feature piece, published in the Coloradan alumni magazine in 2021, tells the story of Carlton Shield Chief Gover, then a PhD student in the Department of Anthropology at CU Boulder and one of the first Pawnee citizens ever to pursue graduate training in archeology.

The road hasn’t always been easy. As Shield Chief Gover explained: ‘Archaeology is an inherently colonial practice.’ But the young researcher joins a growing number of Indigenous archaeologists who are working to change that—embracing knowledge from both Indigenous communities and the halls of American academia.”

Born and raised in Chicago, Strain studied ecology and evolutionary biology at University of California, Santa Cruz, and went on to complete its science communication graduate program in 2010. He joined the office of Strategic Relations and Communications in March 2018. He said he got into the field of science writing largely for the conversations.

“There’s something special about getting to talk to people about what they love.”

Strain covers a broad array of beat areas, from space science and physics to political science, anthropology and education and has written about everything from icy asteroids to atomic clocks to Rocky Mountain snails.

He particularly loves interviewing graduate students, who represent the future of their fields and whose excitement about their work is infectious.

“That was particularly true for Carlton,” Strain said. “It’s a major understatement to say that the relationship between the field of archeology and Indigenous peoples in the U.S. has been contentious. But he is trying to reimagine what the field might be capable of.”

Strain will be acknowledged for an honorable mention in the short-form category at the annual NASW conference, held this weekend in Memphis, Tennessee. In 2023, CU Boulder and CU Anschutz are scheduled to co-host the NASW conference, the largest science journalism and communication conference in the country.

“Too often, stories about Indigenous contributions in science go untold,” said CU Boulder Editorial Director Julie Poppen. “Through his strong storytelling, Dan deftly bridges both the personal and professional challenges of being among the first Pawnee citizens to ever pursue graduate training in archaeology at CU Boulder. More stories like this are needed.”

Former CU Boulder science editor and writer Trent Knoss will also be acknowledged, for a win in the long-form category titled “Coal at Sunset: A Colorado Town in Transition” produced by the Institute for Science and Policy at the Denver Museum of Nature and Science.