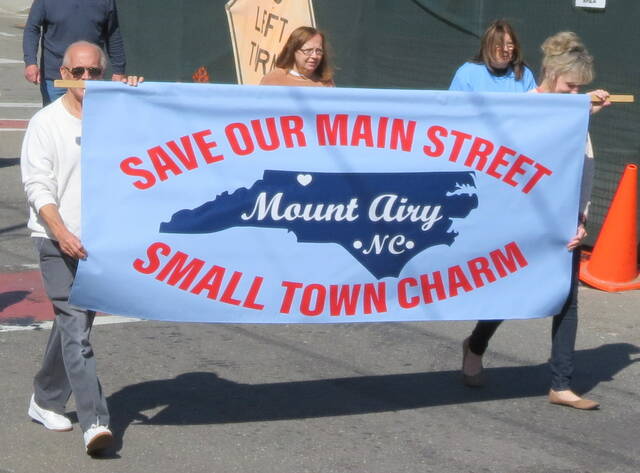 Mount Airy government officials who support a new downtown master plan are not expected to reconsider the measure, despite opposition among critics including a protest march last Sunday.

“I see the process going forward,” Mayor Ron Niland said Wednesday regarding the plan approved by the city commissioners in a 3-2 vote on Sept. 1.

It updated a previous master plan done in 2004 to include today’s business outlook and help guide the future of Mount Airy’s central business district and adjoining areas.

But it has met with opposition from some downtown merchants and leaders, along with citizens at large, who fear this will result in a quaint downtown adopting the “cookie-cutter” look of other places.

They see the plan’s recommendations for new flex spaces accommodating outdoor dining and additional elements — along with landscaping and other cosmetic changes, including tree plantings — as undermining what already is a charming, and thriving, downtown.

In addition to organizing Sunday’s “Save Our Main Street” march, plan opponents have circulated petitions in the hopes of getting the majority of city commissioners supporting the plan update to reconsider their Sept. 1 action.

“I don’t see that,” Mayor Niland said Wednesday of this possibility.

Niland, a firm supporter of the plan, believes the measure received sufficient study which does not necessitate another look.

“We had a lot of public meetings,” he said of a nine-month process leading to the plan’s passage. “This wasn’t done in a vacuum.”

The plan’s supporters on the council also have drawn fire for voting on the measure the same night a public hearing was held concerning the proposal. During that hearing, the majority of speakers said they were opposed to the plan as it related to changes eyed for North Main Street.

In discussing the vote on Wednesday and whether, in retrospect, it might have been a good move to delay action until further study, the mayor said, “I don’t know, I think that’s hindsight — I don’t think there was any ill will on anybody’s part.”

And in discussing any need for the matter to be revisited, “I think before anything’s done we will revisit (it),” Niland said of individual aspects of the plan.

“If and when we move forward, we will do it block by block,” he assured. “The plan is not written in stone.”

The mayor also indicated Wednesday that he believed the opposition mounted obscures the fact that many downtown business operators largely support the measure, echoing comments he and other officials made at a council meeting last Thursday.

“I walked up and down Main Street and met at least 40 or 50 property owners,” he related.

While some dislike certain parts of it, “in my conversations with property owners, they’re generally satisfied with most of the plan.”

The opposition also was addressed last Thursday by other plan supporters, including Commissioner Steve Yokeley.

Yokeley’s presentation of carefully worded remarks included his belief that no one wants to see North Main become a one-lane street lined with palm trees — another West Palm Beach, Florida, Asheville “or any place besides Mount Airy.”

The longtime commissioner then took aim at what he variously termed as “naysayers,” “fear mongers,” “doomsday prophets,” “obstructionists” and “saboteurs.”

“I wish we could expect better from this small group of very vocal but consistently negative people in our city,” Yokeley continued.

He said some claim to represent the silent majority, but are relying on suppositions, innuendos, false narratives, negative comments, misinformation, partial facts, uninformed opinions and even personal attacks to make their case.

“They can always be counted on to conjure up a toxic witches’ brew which isn’t appropriate even at Halloween,” Yokeley charged.

He says the critics should produce their own plan rather than attacking a positive one that is focused on the future. “Let’s hear what you want to do instead of what you don’t want to do.”

Yokeley said he wishes the plan opponents would take time to get the facts on all issues before developing uninformed opinions and spreading misinformation along with “outright lies.”

“Think about what we could accomplish if we all work together,” said Yokeley, who began his commentary by mentioning that “we all need to get along.”

Statements by fellow members of the city board also showed that they are entrenched in their positions.

Commissioner Marie Wood said she couldn’t understand why a good plan has become “blown out of the roof,” as evidenced by criticisms being leveled.

Wood further mentioned that she had studied every aspect included in the 78-page document from the start “and I did not see any reason to vote against it” on Sept. 1.

She agreed with Yokeley in loving Mount Airy and not wanting to lessen its charm, much of which is due to its people.

“The citizens of Mount Airy make our city and they can also break it up,” Wood said.

Zalescik said he also had researched the plan from the beginning and believes one way it will help involves better mobility and walkability downtown.

Council members were prompted to offered such comments in reaction to citizens addressing the plan during a public forum at last Thursday’s meeting, including four people critical of it and two who were supportive.

Shirley Brinkley, a former Mount Airy commissioner, said during her time at the podium that the predominantly non-supportive remarks by citizens during the Sept. 1 hearing seemed to make no difference among the trio of board members voting favorably.

“I believe you had your minds made up,” Brinkley stated.

“People don’t really want the look of Main Street to change,” Armstrong said, adding that citizens shouldn’t “stand by and do nothing.”

John Pritchard, another forum speaker, offered a simple plea to city officials: “Build on what’s successful and don’t mess it up,” he said.

Main Street Coordinator Lizzie Morrison of the group Mount Airy Downtown Inc. offered support for the plan during the forum and sought to allay fears.

“I was born and raised here — this is my hometown — I’m not trying to erase what we love about it,” she said.

In addition, John Phillips, a business owner on North South Street, spoke positively about the downtown plan and thanked city officials for approving the measure.

“When something comes up like this, there’s always disagreements, people on different sides,” Phillips acknowledged. “It’s a myth to say ‘keep things the same’ — change is inevitable.”

The local businessman believes the plan could serve to increase revenues and lower property taxes.

Commissioner Jon Cawley, who had voted against the measure on Sept. 1 along with the board’s Tom Koch, offered his take on that outcome — and its timing.

“It was obvious to me the night we had the discussion that the public was not ready for it,” Cawley said of the plan, which the commissioners had the power to act on — or not.

Holding the vote then “was a poor decision on our part,” he asserted.