If you can, you should try belt squats. The exercise variation allows you to work with heavy weights as you would with the ever-popular back squat while shifting the load from your spine, which can be extremely helpful for anyone with back issues.

“When it comes to [back] squatting, one of the best ways to alleviate some of that stress from the lower back is by opting for belt squatting,” says David Otey, C.S.C.S., trainer and Men’s Health Advisory Board Member, noting that it’s a particular issue for folks with low back pain.

But the only option to do the belt squat most exercisers are familiar with requires a specialized machine, or a complicated setup with the proper attachment. Belt squatting can be very challenging for anyone without access to these things. Enter: the belt squat attachment by Revolt Fitness, which is the latest piece of fitness gear to become a contender for the MH Strong stamp. “Is this a legitimate option?” asks Otey.

With that, Otey launches into his in-depth review of the Revolt Fitness Belt Squat ($219). He put the piece of gear to the test to determine if it’s a feasible option for the everyday exerciser—or if it’s just another fitness gimmick that will wind up collecting dust in the corner of your home gym. 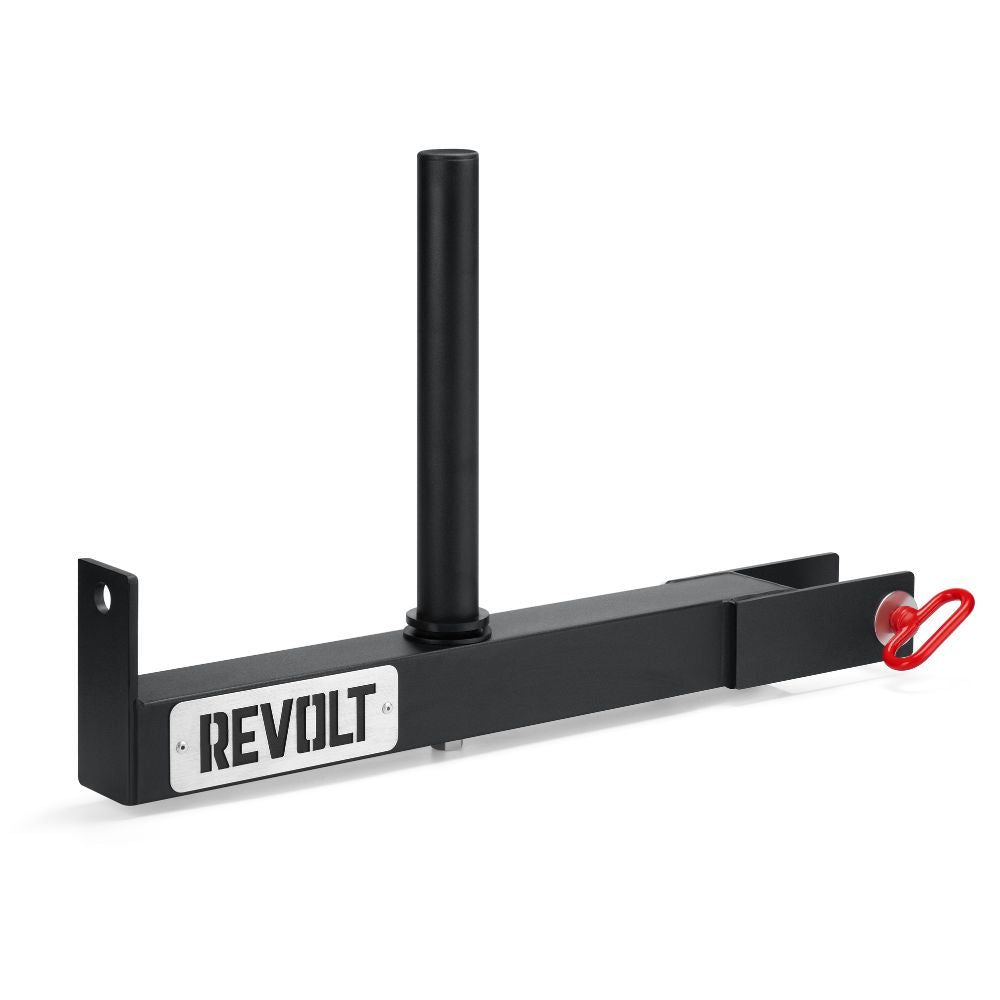 What We Liked About the Revolt Belt Squat Attachment

The Revolt Belt Squat Is Cost-Effective

“The number one thing was, it is very cost-effective,” notes Otey. “If you look at the list of belt squats that are available on the market, they are thousands of dollars at a minimum.” With the Revolt Fitness version, you’ll only spend $220.

The second thing that appealed to Otey is that this belt squat attachment doesn’t take up the same square footage as a whole machine. Yes, you’ll need to have a squat rack—but otherwise, it’s relatively small. “It’s not gonna take up a lot of space and because it’s an attachment on your squat rack or your squat stand, you can add it onto the squat rack when you want to and you can remove it from the squat rack when you want to,” said Otey. More space-savers in our home gym? Yes, please.

The Revolt Belt Squat Can Do More Than Just One Thing

Otey really loves that you’ll be able to do more than just one movement with this piece of gear. “Most people see it as a belt spot attachment because it was made to answer that problem. But for anybody that’s looking to have a different way to do deadlifts or Romanian deadlifts or rowing patterns, this lever system is a great option for an add-on that again is with a small footprint,” he says. “So imagine doing any of the pulling exercises you would get with a landmine, but take it to a smaller imprint.”

What We’d Change About the Revolt Belt Squat Attachment

The Revolt Belt Squat Offers a Limited Range of Motion

As Otey notes, the belt squat attachment’s compact size and the way it’s affixed to the squat rack becomes a disadvantage when it comes to attaining optimal depth during the lift. That’s one of the benefits of the belt squat, and you lose it here.

Many belt squat setups start from a standing position, then you descend into the squat. The Revolt attachment’s setup makes it so the weight is on the floor, meaning you have to stand up (the concentric part of the lift) before beginning your set, which makes it more difficult from the jump.

While the belt squat attachment is made so that it can fit many different types of squat racks—a very good thing—this versatility means that it might not be the best fit for your specific squat rack. In other words, the attachment will work, but it might have a loose fit from side to side. This might not be the best setup for people who have asymmetry in their squats.

Who Is the Ideal Revolt Belt Squat User?

Otey says that the Revolt belt squat attachment is ideal for people with home gyms who are looking for an alternative to heavy back squats and want to do try some other exercises with the versatile tool. That said, he doesn’t see this as a replacement for traditional belt squat machines, and for serious athletes who are used to working with those types of setups.

Perri is a New York City-born-and-based writer; she holds a bachelor’s in psychology from Columbia University and is also a culinary school graduate of the plant-based Natural Gourmet Institute, which is now the Natural Gourmet Center at Institute Of Culinary Education. Her work has appeared in the New York Post, Men’s Journal, Rolling Stone, Oprah Daily, Insider.com, Architectural Digest, Southern Living, and more. She’s probably seen Dave Matthews Band in your hometown, and she’ll never turn down a bloody mary. Learn more at VeganWhenSober.com.